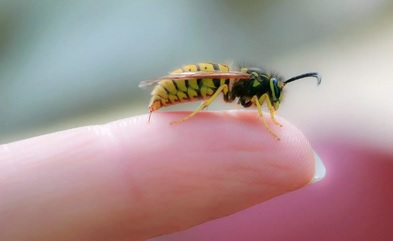 I want to believe that all people know that bees only sting when they are on their territory or when they are attacked. Strong odors can unleash your instincts and if you try to remove it with your hands, the feeling of threat increases and ends up stinging.

The difference between bees and wasps is that wasps do not lose their stinger without remedy, in short, they continue to sting. As a curiosity, we will say that only females sting, as the function of the stinger, is not only defensive but also its channel for laying eggs.

Before putting natural remedies on a wasp sting, I recommend that you take your first aid very seriously, as it helps a lot to treat them later and alleviate the discomfort for the affected person. First, do not start rubbing or scratching the affected area, as you may have an infection. The role of rubbing the affected area is to make the toxins weaken the cells, and the bacteria on the skin can penetrate through scratches. Thoroughly clean the area with soap and water.

If you are stung by wasps, I recommend putting something cold on the wound. If you have ice, apply it on the bite, never in direct contact with the skin, but wrap it in a cloth or something and every 10 minutes.

Natural remedies for wasp stings have positive effects only if you do not have an allergy. Let’s see which ones we can use: